About the Founder and Foundation 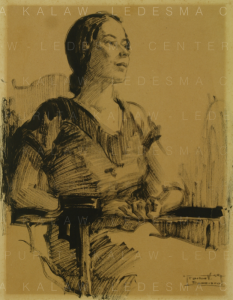 Purita Kalaw-Ledesma (b. 1914, Manila; d. 2005) was a seminal figure in Philippine art. She was an artist and a writer, a curator and cultural worker, a patroness and collector.

She was the founder and the first president of the longest surviving art organization in the country, the Art Association of the Philippines (AAP), established in 1948 after the end of the Second World War. Her vision, stewardship, and generosity of spirit enabled Philippine Modern art to gain foothold and eventual acceptance by a reluctant public through her five-pronged approach: encouraging and empowering artists to find original modes of expression of art through AAP’s annual art competition and through scholarships abroad; the development and professionalization of art as a legitimate career; assisting in the creation of art societies devoted to printmaking, cartooning, and sculpture; the encouragement of local art criticism; and the inclusion and improvement of art education in schools from elementary to college.

She left behind a collection of Philippine paintings, sculptures, drawings, prints and mixed media works as well as pre-Hispanic pottery that have been exhibited in major museums and featured in publications in the Philippines and abroad. Hers is one of the best collections on Philippine Modern art assembled during a period when very few were collecting. She was the author of four seminal books, including her memoirs: The Struggle for Philippine Art (1974), Victorio C. Edades: National Artist (1979); both co-authored with Amadis Ma. Guerrero; The Biggest Little Room (1987); and her memoirs titled And Life Goes On (1994). She wrote her first book, The Struggle for Philippine Art, in order to share the story on the beginnings of the AAP and Philippine Modern art from the perspective of an important player and primary source. Today, it is an indispensable resource for anyone interested in Philippine art.

Kalaw-Ledesma was an arduous chronicler of events, activities, and writing on Modern art. Her art and archival collection are significant resources on Philippine Modern art. Since the founding of the AAP in 1948 until 2000, she was able to compile 83 scrapbooks containing clippings on art-related activities from newspapers and magazines, notes, invitations, posters, letters, and photographs. They provide a record of the prolific creative production that accompanied Philippine Modern art during the second half of the 20th century.

These scrapbooks, together with her Filipiniana and rare books collection, form the crux of the PKL Archives. It is the most extensive and only art archive on that period in the Philippines.

In 1978 Purita Kalaw-Ledesma (PKL) founded the Kalaw-Ledesma Foundation, Inc. (KLFI), a non-stock non-profit foundation, to promote the advancement of Philippine art and culture. She donated a large part of her art collection to the Foundation so that the public, especially students, would have access to the many masterpieces in it.

The challenge for the Foundation is to be responsive to the changing needs of the times. In the 1950s and 1960s there were few venues for artists to exhibit and sell their works. The AAP answered the needs of those times. But with the plethora of galleries, auction houses, and a very vibrant art market, that need no longer exits.

The Purita Kalaw-Ledesma Center, located in KL Tower in Makati, was inaugurated in 2015. It serves as a research center, exhibition space, and contains the PKL Archives and Library.

The Kalaw-Ledesma Foundation Inc. continues its mission to bring to light the overlooked, undervalued, unappreciated areas of Philippine culture. That is what Purita Kalaw-Ledesma did in her lifetime. This is what the Foundation hopes to achieve, in its own way and for its own time.

About the Purita Kalaw-Ledesma Center 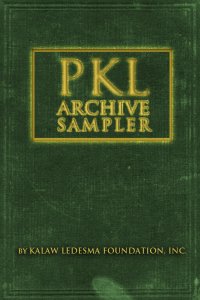 CLICK THE BOOK to view a sample from our Archives

Researchers from the Philippines—as well as from all over the world—have made use of our archives for lectures, newspaper articles, peer-reviewed academic journals, and graduate and postgraduate dissertations. With material ranging from the mass-published to the personal, a number of the scrapbook’s contents are the only existing or surviving copies. The scope of the collection also often expands to outside the field of visual art: subjects such as society, history, theatre, and literature are also covered in the archive. There is also a good number of material from the outside of Manila (such as Baguio in the Cordilleras and Bacolod and Silay in the Visayas), displaying the period’s ample growth of Philippine art beyond the country’s cultural and political capital.
All volumes of the archive have been digitized into a series of 81 compact disks for easier use. Researchers are discouraged from perusing the physical copies of the archive to maintain their condition. The digitized version of the archives enable the researchers to search for specific keywords and topics within a single much more quickly than it would to browse through the physical volume.

Until now, new material is constantly being unearthed from the archives. With each revisit to the scrapbooks, researchers—as well as our own staff—often discover or rediscover gems in the collection, such as personal letters or undocumented artworks by now-landmark artists. The Purita Kalaw-Ledesma collection’s broad coverage from the country’s Postwar, Martial Law, and post-EDSA revolution periods paints a vivid image of art and its roles in the 20th century as well as projects a promising vision of what is to come for the fields of art and culture in the Philippines.

Throughout her career, Purita Kalaw-Ledesma amassed a large collection of art that is currently in the Foundation’s possession today. These include works by giants in the Philippine visual art scene, including their early works as prizewinners of various contests held by the Art Association of the Philippines. A good number of the works in our collection were also personal gifts from artists to Purita Kalaw-Ledesma, and many of these pieces are portraits of the patroness herself.

The collection boasts pieces by many National Artists, such as Arturo Luz, Cesar Legazpi, H.R. Ocampo, Victorio Edades, Ben “BenCab” Cabrera, Ang Kiukok, Abdulmari Asia Imao, Carlos “Botong” Francisco, Fernando Amorsolo, and Napoleon Abueva. Other extensive and prominent collections in our roster are prints by Manuel Rodriguez, Sr., exhibit posters from the 60s to the 80s, and works by Anita Magsaysay-Ho. Three-dimensional work such as traditional Filipino pottery, wooden Santo, and sculptures are part of the collection’s roster as well. The collection also includes works by Purita Kalaw-Ledesma herself: sketches from her travels, studies from nude drawing sessions, and prints.

The Center holds biannual exhibits, moderated by invited curators who are given the chance to work with Purita Kalaw-Ledesma’s collection. The Foundation also frequently loans its artworks to prestigious galleries and museums all over the country, as well as the National Gallery of Singapore, and Casa Asia in Spain. 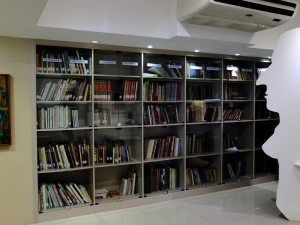 The Purita Kalaw-Ledesma Center also contains a large collection of books from Purita Kalaw-Ledesma’s engagements with countless artists, writers, and cultural institutions both here and abroad. The library also contains work of Purita Kalaw-Ledesma’s authorship and co-authorship: The Struggle for Philippine Art (1974), Edades: National Artist (1979), The Philippine Art Gallery: The Biggest Little Room (1987), and A Critical Analysis of Modern Painting in the Philippines Today (1955). Currently in the process of cataloguing, the Center’s collection features formative titles such as The CCP Encyclopedia of Art, Alice Guillermo’s Art and Society, and books on iconic artists such as Malang, Manansala, Ang Kiukok, Joya, and the Blanco Family.

While the selection of books hinges heavily on Modern art in the Philippines, the Purita Kalaw-Ledesma Center also offers a wide selection of books on Philippine Studies (published both here and abroad), Philippine literature, history, and politics. A prominent feature of the collection is the works of Teodoro M. Kalaw, Purita Kalaw-Ledesma’s father. The library’s rare imprints also include books by some of the country’s National Artists for Literature, such as Nick Joaquin, N.V.M Gonzalez, Amado V. Hernandez, F. Sionil José, Rolando Tinio, Severino Montano, José García Villa, and Edith Tiempo.